The following resources present erasure poetry as a perfect medium for using choices to create poetry from a source text. 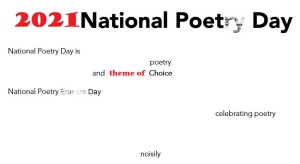 The principle for these resources is always to write/create, not to read and analyse poems to prompt writing. That said, I am presenting erasure approaches to English GCSE study/examination texts: the intention is the same – to promote creative writing – but where curriculum teaching is currently and regularly controlled, this can make it difficult for teachers to feel they can ‘step outside’ such to celebrate National Poetry Day.

The following resources of erasure using the text Strange Case of Dr Jekyll and Mr Hyde illustrate the kinds of ‘knowing’ creative choices students can make using extracts from a text.

The following resources include a generic Teacher’s Note so that the ideas presented can be applied to any texts and for students of all ages and ability.

All following pdfs feature the text Strange Case of Dr Jeckyll and Mr Hyde as exemplar: 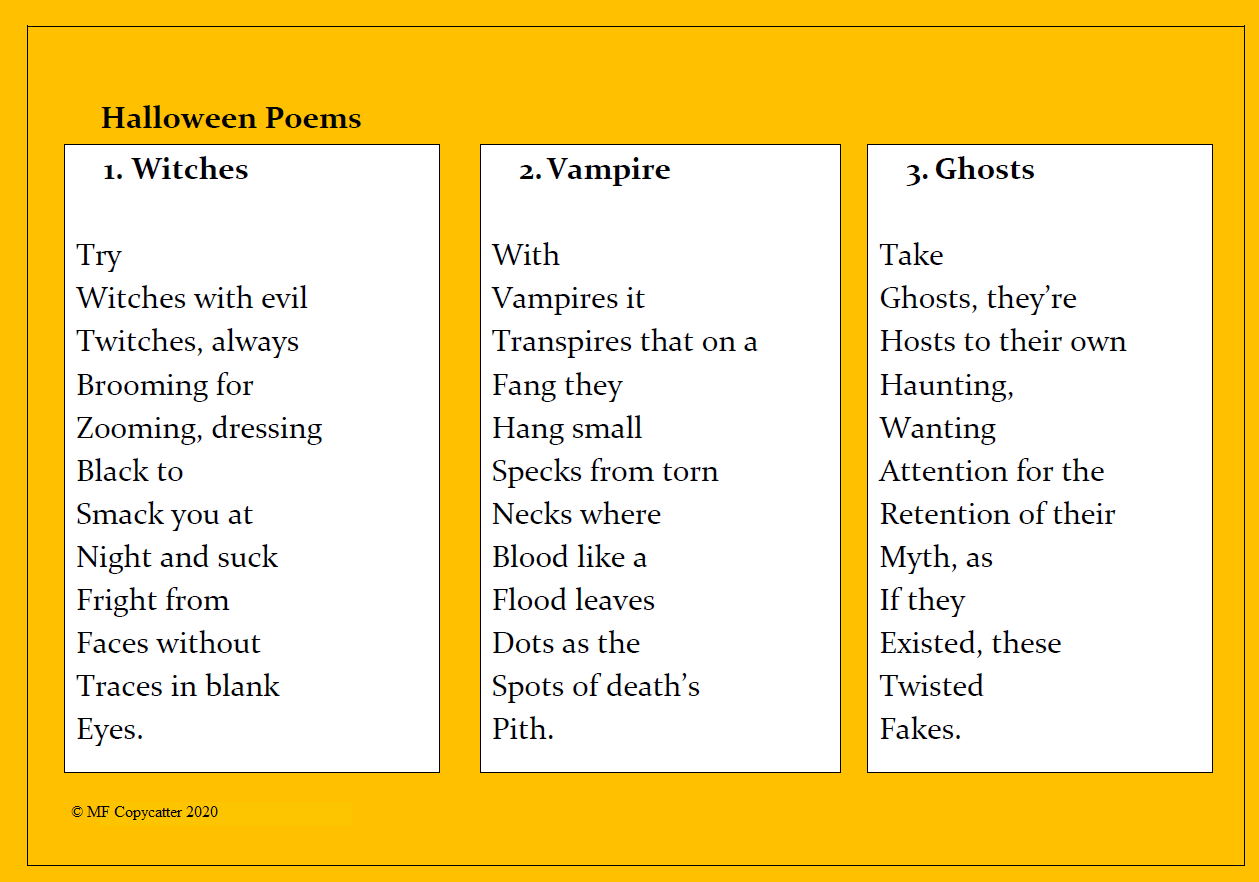 Designed around the Halloween theme as its time is approaching (at the date of posting), this writing idea features fronted rhymes to give the creative task a distinct focus.

Apart from making sure you are comfortable with the theme in the context of your presenting, it is a straightforward writing game, the challenge being a genuine one in how the rhyming ‘reverses’ the norm, and is presented as an alternative to the over-familiar and often controlling nature of end-rhymes.

Everyone should write a found poem.

And then keep writing them.

And teaching/introducing them to others.

Whether it is cut-up, erasure, humument or whatever named type you choose/follow, finding a poem in another source is one of the more rewarding creative processes out there. Within the broad writing approach called Copycatting here on this site, the found poem is the most glorious finding and copying and pilfering and subverting and altering and creating of poetry possible.

The found poem exemplifies the very essence of discovering the ‘accident of meaning’. There are levels of control to this, and it can begin with total randomness. It can have quite strict rules. It is the writer’s choice.

As ever, I do feel the following resources provide the detail and examples needed to explain more.

One further aid to this process I would suggest is to search online for ‘word generators’ and/or similar which have the technical facilities to increase the potential for finding poetry in other texts. I will mention one, but this could disappear over time. For now, I like to use this site.

If you would like to view an entire text subverted by finding alternative texts within it, the following is my erasure of The Mueller Report,

This is going to sound like an excuse, but it isn’t, though it is.

This and the other creative writing resources I am currently posting began their lives as resources delivering [an ‘appallingly’ curriculum-tainted word] that compulsory language focus in English subject teaching of some years ago now, spawning the language hour in primary schools – I have, thankfully, forgotten the actual terms used/applied to this* – and which became a necessary feature of schemes of work at secondary level, and which has subsequently been heavily criticised and disowned, but which has retained a lasting vestige of ruin in the linguistic focus teachers still teach and students apply in their GCSE English Literature study and responses [when exams happen].

I designed these resources partly to accommodate that compulsory aspect, but my intention was, and still is, to deliver this through creativity/creative writing resources. In re-purposing these here, I haven’t, however, removed the recurring focus [in bold] on specific language features as these are terms quite useful to know/think about!

And I hope you saw what I did in the above with the preponderance of adverbs. This writing idea, taken from another Adrian Mitchell idea and poem, is essentially for the fun of it. It isn’t to teach adverbs, but it is to ‘teach’ the potential of language to surprise and delight.

The old-school approach of cutting and placing and turning over is all part of the fun. Perhaps some pasting too.

*Looked it up: The Literacy Framework

To repeat what is explained in the About section for this blog, most if not all of these creative writing ideas began as resources for teaching/working with students. That means they are primarily made for classroom use and working with young writers. But as also stated, and I have subsequently mentioned in introductions to each writing idea, these are to a degree re-purposed for any and all writers – the common denominator often being guidance and prompts for new writers, whatever age and whatever context.

Concrete Poetry is a great place to start with younger writers. My teaching experience was entirely in the secondary sector, and if introducing students to concrete poetry as a precise type, many may have come across these as shape poems at primary school, and the idea is to move beyond this, though not always. I also taught students at GCSE and especially A Level and this is where more complex ideas about the visual representation of language can be explored, and this is why the ideas presented here can have a broad appeal.

Interestingly, in re-purposing these – in other words, revising – I have been made aware of how technical/digital advances have usurped the ‘practical’ [cut and paste] aspect of how these were originally envisaged! Though not entirely – think of collage. But in this respect there will be an expertise with apps and processes beyond my experience and which may take these ideas so much further, and perhaps with more ease of production.

There is a wealth of online access to concrete poetry models, past and present. If a Concrete Poetry 4 appears eventually in the Resources below, that means I have added a few more examples of mine. Otherwise, the resources from 1 -3 should provide all the detail and explanation required.

I am a big fan of The List Poem: to write myself, and as a model for students/others to use in their own writing.

It is the simplest structure, and it can be the most effective for writing ‘poetically’ [in the broadest sense of that word!].

Anyone who has explored/used resources on this site linked to National Poetry Day will have noted how this is my most popular ‘model’ for presenting to writers. I won’t revisit the reasons why, which are found in and across those resources, but if you are unsure do dip in and out of these.

For this creative writing idea the resources are self-explanatory: List Poems 1 and List Poems 2 providing the writing idea exemplar and explanation. List Poems 3 is an example of one of mine, and it demonstrates an alternative presentation.

The List Poem can and does work at many levels. The ideas here are not ‘simple’ ones and will challenge writers.

‘Simple’ is not, by the way, a qualitative term. The beauty of the list poem is its simplicity, but it can operate at many levels.

This creative writing idea is about providing a head start.

Sometimes it helps to have a broad vocabulary from which to choose at the start of writing – this more selective than ‘finding’ words in an existing text [e.g.using older texts for found poetry]. The process/purpose is the same: writers can get that head start by having a ready vocabulary that might not have occurred without prompting.

As with the other recent additions here on the site, details and process are explained in the resource sheets: 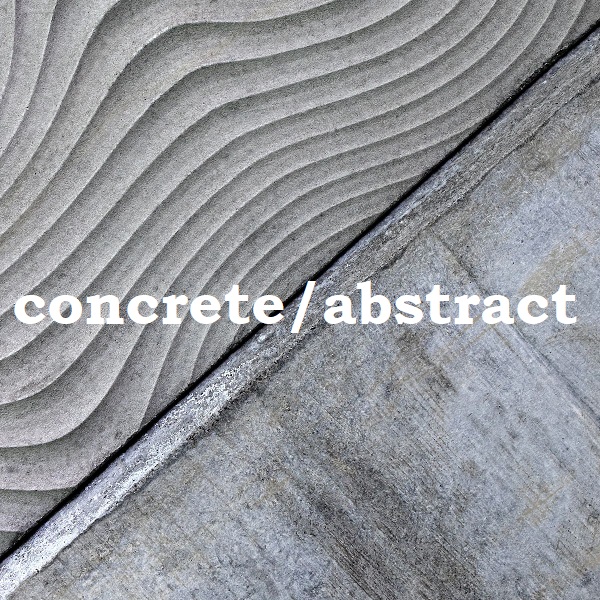 There is a great element of play with this.

This uses the same process as cut-up poetry production – the cutting out of words/phrases and reassembling randomly – but there is an added element of control in the writing and mixing of concrete and abstract phrases.

So this is a step beyond the concrete/abstract noun spotting!

Self-explanatory in the following resource. As with other similar ideas on this site, this is one where students/writers need to get way beyond the literal and embrace the accident of meaning!

This creative writing idea is focused on a use of repetition.

This creative writing idea is focused on a use of repetition.

Already overdone in the title? Perhaps you are right. But as a writer or in prompting writing from others, you have to persevere, and where repetition in writing can be error/lazy and so on, at other times it is dramatic and dynamic.

This resource channels the use of repetition for more positive effect. As it states, perhaps less ‘poetic’ than some writing, but being metaphoric isn’t everything in poetic writing and this idea explores other skews.

The researching element is also important, as is the preparation for all writing – especially when working with young/new writers: gathering ideas/detail/evidence and so on can provide a significant foundation at the beginning, and this ‘list poem’ structure/pattern further supports the process.

With thanks to the wonderful Adrian Mitchell. He should have been our Poet Laureate.